I’m starting 2013 with thoughts of the fisherman’s wife I met a few months back. And because it could not start any better if not with her. It was an early weekend of June. I took a shower, and shoved my what little I brought on this trip in my backpack – this with hopes that one of my ZaNorte travel companions might have changed their minds for this early side trip to join me. The hallway was empty with only light creeping in from the glass doors  and mutted greetings from the hotel night staff wiping sleep from their eyes. I thought I heard snoring from the end of the hall but I wasn’t sticking long enough to distinguish whose snoring  it was. I do not even know if I could tell but I can bet on it that it must be that of C. Just kidding. 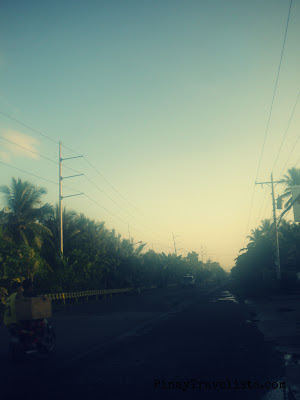 And as I headed out — I mentally kicked myself, I’m heading off without a plan, again. I was not surprised. I had a wallet and just my backpack for belongings to get me by, and everyone knows charm is always an essential. I knew I had that, or how little I have of it just enough to get me by. I travel as much as I of it in my pockets. We all need a little charm or two when we bank on people’s soft spots. I was told by a politician during my dad’s wake that charm is both a gift, and skill, and never just the other.

The bus halted at a bustling morning market scene. Dapitan City. I decided, beyond the makeshift stalls of fresh farm produce was an unmistakable blue horizon, it would be my stop.  I was instantly surrounded with men in sleeveless shirts, if not  shirtless guys. I wished I accidentally walked in on an all-male-model photo shoot. But no. I was brought back to reality when, they, in deep masculine voices pestered asked me to take their outrigger boats for an island trip before my feet even hit the concrete road. For the locals the obvious visitor is always a target, and potential customer. But I can hear the waves despite the loud bargain of prices from these men. Unfamiliar faces has become so familiar. You get them of different sorts, and it is always best to look at them in the eyes, smile when you refuse, and thank them for the efforts of the offer.

Walking down the beach length, I saw an old lady was sitting on an irregularly shaped bench worn out from use, her hands rough from working on some fish net of some sort. She looked up, and smiled at me, and I took it as an open invite to sit beside her. Yes, I know. I am, probably, that kid that can be lured by anyone with adorable hamster-looking eyes, and old gentle folks have that effect on me.  I like talking to the old, their wisdom shows in the greying of their hair, the roughness of their hands, and the unnoticeable quivers on their knees. 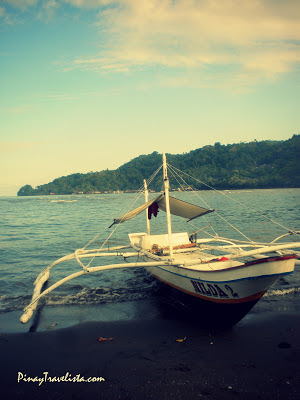 Absently, “I wonder if I would regret not going to Aliguay Island”, thought escaped from me. Writers makes lousy anythings. At some point you’re incapable of shutting your thoughts up, if you are not quick  enough to pen them down they just vanish to thin air before you blurt out another thought.  She looked down at me, and asked who was I with. “I’m here alone”. It slipped before I could bite my tongue, and regretted the moment I said that because she then ask the dreaded one syllable word question solo travelers dance their way out to answer. “Why?” I wanted to answer, “why not?” and wished that the daunting three letter word would suddenly vanished from the dictionaries. I hate it when I have to mentally construct decent answers, the kind to make the old feel comforted. But before I could answer, she said, “Dili angayan mag-inusara ang babae magbyahe. Balik dinhi, kanang naa na ka’y kuyog.” placing a warm wrinkled hand on my arm like a grandma telling a girl should not be traveling by herself, and to come back with someone traveling with her. I needed no probing at that.

We talked more about her life, her hands that knew which nylon cord to pull out, and tie without even looking at it, and fishing that brought her to meet her husband. The latter soon she explained that it was never about fishing, it was about the man. Never about what one does, but who he is. Never about how your life would be, but how your life would be should you decide something else. Her smile was gentle, like she wanted to tell me something I already know of but, maybe, forgot.

Because I need rest more often than I admit to myself. And often we find it’s harder to say no to the person in the mirror than the humans around us. Even if it means not going solo on the road because I’m too stubborn to wait on anyone to join me. A “no” is a “no” even if it’s the road that beckons.

We get so wrapped up on what we do, what we want to achieve and trying to prove, if not to others, to ourselves, that often we forget to check how we really are. Read as: Take care of yourself more, until someone else does.

“but to try to not hold back too much“

I do not know if it means anything more but for some reason I think my heart does.

An entry to PTB January 2013 Blog Carnival
hosted by Roj Braga | The Adventures of AdventuRoj!
on the topic “New Beginnings”.