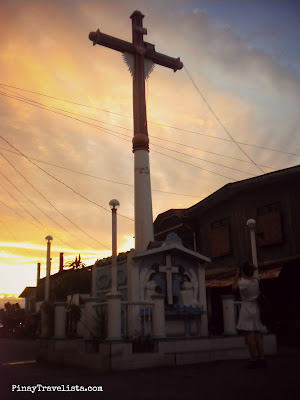 On one of our nights in town, we asked our hosts if we could catch a sunset and get to visit the boulevard again. We wanted to see it as the last few curtains of natural light dances in hues of red, orange, and faint yellow.
STA. CRUZ MARKER.
Just as it was about fiery red skies, we were greeted by one of the heritage landmark found in Dipolog City, the Sta. Cruz Marker. It is the oldest landmark of Dipolog, and of Christianity. To this day from the time it was erected, the cross plays a significant role in the lives of local folks. Etched on the extended base was En 3 de Mayo 1905 that marks the day a group of Boholanos first landed in this city, and called it their home. Dipolog sits on the tip of western Mindanao and is called the Gateway to Western Mindanao and the Zamboanga Peninsula. It looks on the Negros Provinces, and Cebu beyond the body of water.

A few nights before, hours, or less, before midnight on the same night that we arrived at Dipolog City, we prematurely visited the Boulevard of Broken Dreams, as it is called, with two of our companions arriving late. Having nearly all food establishments closed up, we were told that this is where you can get meals at around that time. Despite the obvious tiredness, and the nagging thoughts of work for me to do, I joined the group to see a bit of town at that dead of night.  It was pitch dark, and the only tell-tale signs of wakefulness was the strong smoke from grills that wafted in the air as we approached the lined up red stalls brightly lighted by light bulbs hanging by their cords.
I could only make out the sound of gentle waves, and the comfortable sea breeze that carries cool air into the land. That night, I wondered why it was called that, and “Was I supposed to leave something there?”, I silently asked myself. There was no answer, except the comfort I felt being there. I knew we were to visit it again, or I’d find time to see it on one of my two favorite times of the day to be at the beach, “Maybe I’ll get  some answers”, I thought. 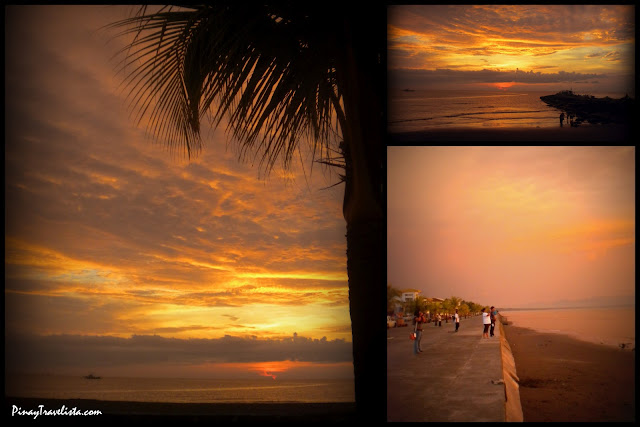 BOULEVARD OF BROKEN DREAMS.
We had just enough light, and the clouds were playful enough to reflect the shying away of the last rays of the sun. I could just stay there till it was pitched dark again. In this long stretch of walkway, where lined up concrete chairs welcomes anyone, families were there, some joggers keeping themselves in shape, and a few just there looking on into the horizon. 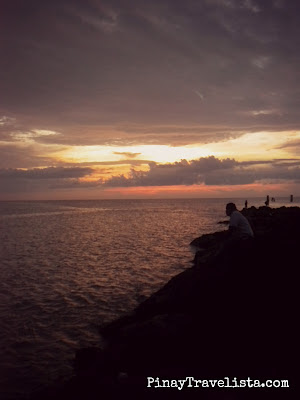 I sat on one of the seats and shared it with 3 others who I presumed were of one family. I wanted to rest my tired feet, and wanted a lower angle for a shot. But I quickly apologized, and stood up when they started talking about family issues I was not supposed to hear. Sometimes people forget their privacy at the heat of the moment, that you just have to give it to them anyways.
I walked along the break water, and saw men placing their baits on their hooks, and throwing their fishing lines into the water. Men as old as my dad, if he was still alive, around the age of my kuya or younger brothers, and some kids around an age of a niece or nephew. And then they sit there waiting for their catch that would fill up their plates that night. I asked a guy for how long he has been doing that, “Since I was 10 years old“, he said. “Are you married now?“, I probed on. “Yes, with 2 kids, and a pregnant wife.” That was honest living, it crushed my heart out because it must be hard for them, but his smile assured me that I should not be.
I did get an answer before leaving the boulevard that sunset. Maybe I should be more forgiving, and less too hard on myself. I have not lost one of my dreams, or that there’s no need for me to throw one away either. The ordinary scenes, and some locals gentle hearts told me that. That despite the wrong turn, or the plain obvious stalling I was doing. I just took a detour when I took the bend on the road or something, and I will find my way back to it some time. I just have to be okay with that.
Much as the comforts of our hotel bed was a welcome, I found it hard to sleep that night. I needed a distraction, so I worked instead.