Skip to content
If there is one thing I would want to check out was the Silliman University. While killing the time, and waiting for the others to arrive, we went to see a bit of the university by the sea on foot. Silliman University is the oldest American Institute, founded on 1901, and is one of the top performing school in the Philippines. It is located, and occupies 33 hectares at the seaside community of Dumaguete City. 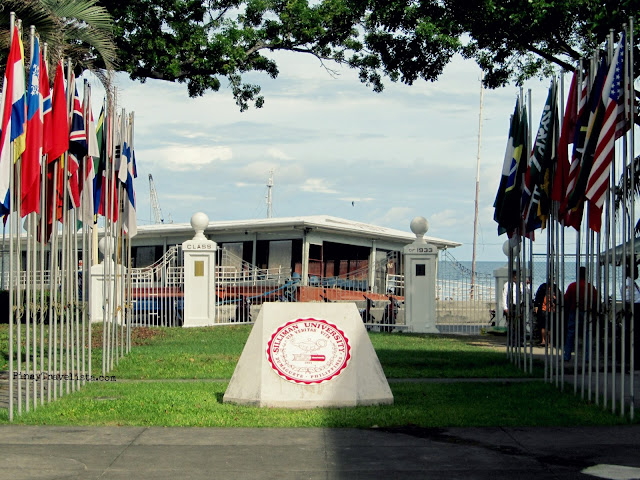 Dumaguete City has been called a “center of learning in the south” or a “university town” due to the presence of Silliman and other universities that have made their mark nationally and abroad.The city has become a melting pot of students, professionals, artists, scholars and the literati coming from the country and the world. unfortunately, we did not get to see most of what Silliman University is for a visitor. But even so, Silliman University is impressive.

THE WEST PORTAL | GATE OF KNOWLEDGE 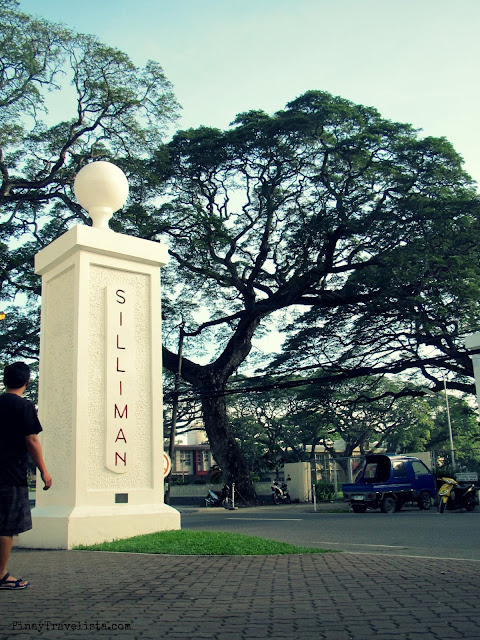 On the western part of Silliman University is the Gate of Knowledge, one of the iconic structures of this institution. It was built in the 1950s, and serves as the main entrance to the main campus, and the starting point of the 2km Hibbard Avenue. The original portal, called the Gate of Opportunity (built circa 1901-1905), is on the southeastern side of the campus facing the Rizal Boulevard. Silliman’s portals have become the de facto symbol for the university and the City of Dumaguete. It has also been incorporated into the provincial seal of the Province of Negros Oriental. 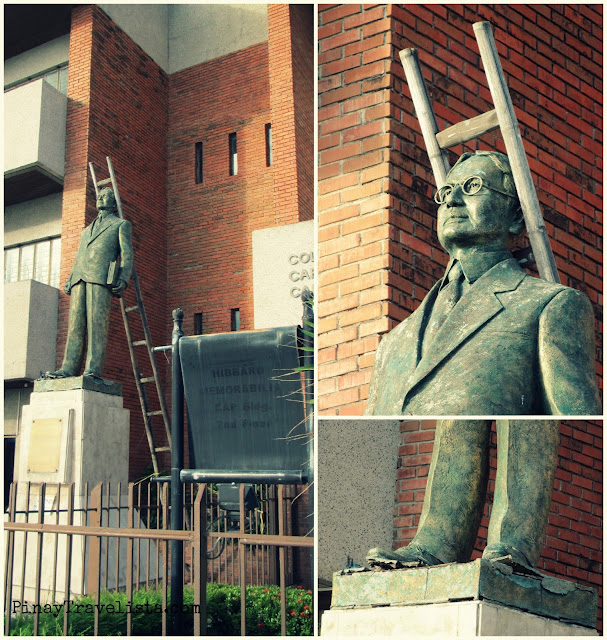 Dr. David Sutherland Hibbard, a man from Lyndon, Kansas who, was tasked to found the institution after serving as a pastor in a Presbyterian church. Upon his arrival in the Philippines, he was commissioned, with his wife Laura, to scout the southern part of the islands to determine the best location for the school. His original points of destination were Cebu, Zamboanga and Iloilo. While in Cebu, a suggestion came to him to make a side-trip to Dumaguete where he met Rev. Captain John Anthony Randolph, chaplain of the 6th U.S. Infantry Regiment stationed at that time in Dumaguete. Later he was introduced to Don Meliton Larena, the town’s local presidente and to his brother Demetrio Larena, then the vice-governor of the province. Hibbard got attracted to the place and decided to establish the school in the locality. He would later on write that the “beauty of Dumaguete and the friendliness of the people” helped in bringing about his decision.

“There were fifteen boys that first morning. The equipment consisted of four desks about ten feet long, two tables and two chairs, a few McGuffey’s Readers, a few geographies, arithmetics and ninth-grade grammars. I was President; Mrs. Hibbard was the faculty.”

In his honor a memorabilia statue now stands facing the Rizal Boulevard in Dumaguete City. However due to time, rough weather, and strong winds  from tropical storms that passed by, we found the statue leaning on a bamboo ladder for support. Nevertheless, it stands proud and unwavering. Thumbs up to that — and really hoping they could get it fixed soon! 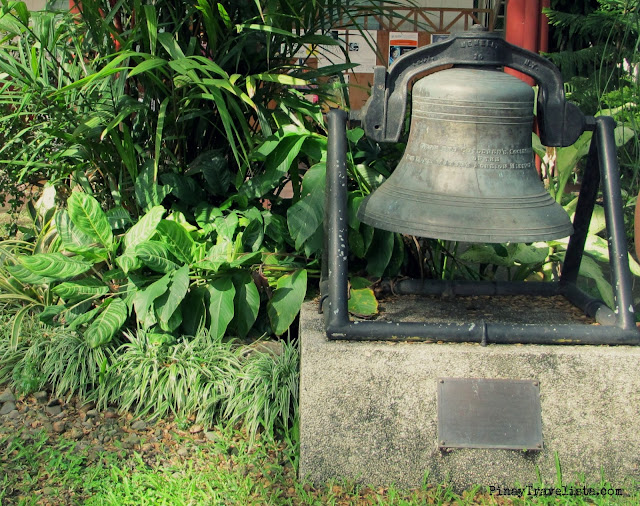 The Silliman University Bell was a gift from the children of America given through the New York’s Women Foreign Mission Board, and was mounted in 1918 in a tower behind the present Alumni Hall.

“For seventy years it commanded the early morning, noon, and evening hours of the University. it defined class period, and provided alarms for emergencies. Its sound would reinforce the sense of belongingness for those who have walk through the campus.” 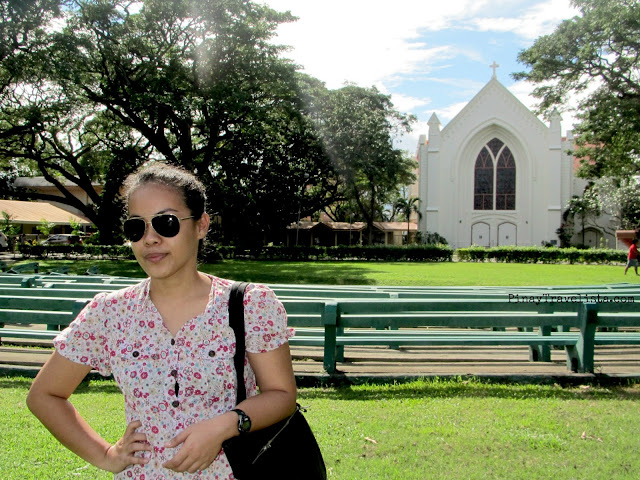 The construction for the Silliman University Church began in 1941. Due to interruptions brought by World War II, it was completed only in 1949. It has extended pews, and sitting area facing the church that is ideal for students, and visitors to be solemn in prayer even when outside of the church walls. Check a separate post on Silliman University Church.
ANTHROPOLOGY MUSEUM

TRAVEL NOTES:
+ If you’re a visitor, do travel with a least one Identification Card to leave with the security guards by the gates, and in exchange for a Visitor’s ID.
+ There are lined up Acacia trees for shade, but the sun might be high up during your walk tour, it is best to bring an umbrella with you.
+ The Anthropology Museum is open for students, faculty, and visitors. Please check out a separate post on that.
+ Silliman University has deeply rooted history on it’s campus, and university’s structures. It pays to read on ahead with what you want to check out. Like I wish we could’ve checked out Channon Hall, it was one of the halls occupied by the Japanese during World War II. Not so much on ghost hunting or of any sort like that, but I do want to see how the structure fairly made it well through the years.

HOW TO GET THERE / DIRECTIONS:
Silliman University
Location Map HERE

1] From the Dumaguete Port
::: Trike = 8PhP
::: On foot, walk straight from the exit of the port which is the Flores Avenue
Look for the large signage SILLIMAN UNIVERSITY,
where the Flores Ave converge with Rizal Boulevard
Behind the signage are several institute halls, the Silliman Hall will be at the end of that block
Take the right turn on that corner, and walk the Rizal Boulevard – Silliman Avenue
Take the first right turn, and your first landmark will be the West Portals
Do ask around, the students, and university staff are very accommodating

You might like to read DUMAGUETE CITY related posts here:
How to Get There | Dumaguete City via Iligan – Dapitan City Route
En Route Dumaguete | Daylight on the Road
Finding Comfort at Hotel Nicanor
Silliman University On Foot
Silliman University Church Across the Field
Silliman Hall & Anthropology Museum
Confessions | Traveling With the Boys — COMING UP! =P