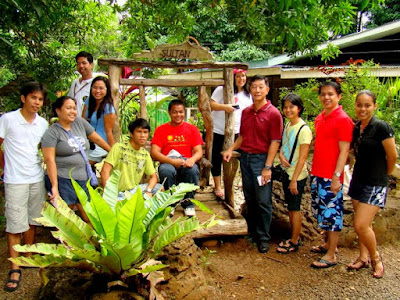 Our gracious host was nice enough to show us around the 2nd Mechanized Infantry Brigade, Light Armor Division, Philippine Army. Our light discussion about Iligan safety and security and the misconception about Iligan City led to his invitation for us to go around and check out the camp.
The tour around the cap could be ideal for children for educational purposes, I remember back then that I our classes would use to go on out on field trips like this. I wonder if they still do that today? 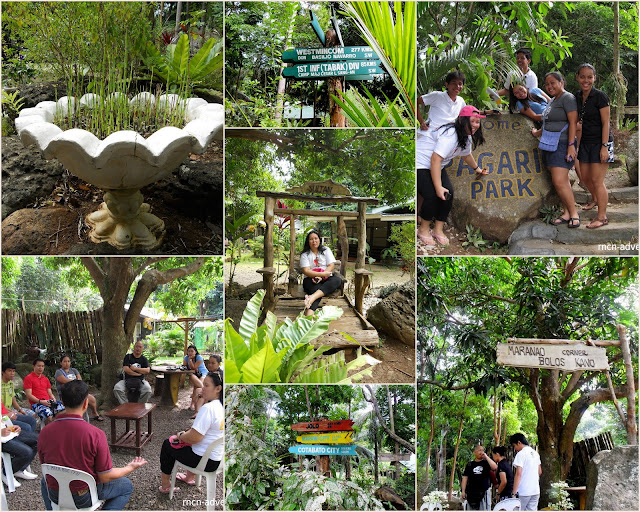 We were after all at the Pagari (Maranao for friends) Garden. The outdoor area is just adjacent to a basketball court, tennis and badminton courts, the have recreational facilities here that they also invite outsiders to play games them or two. 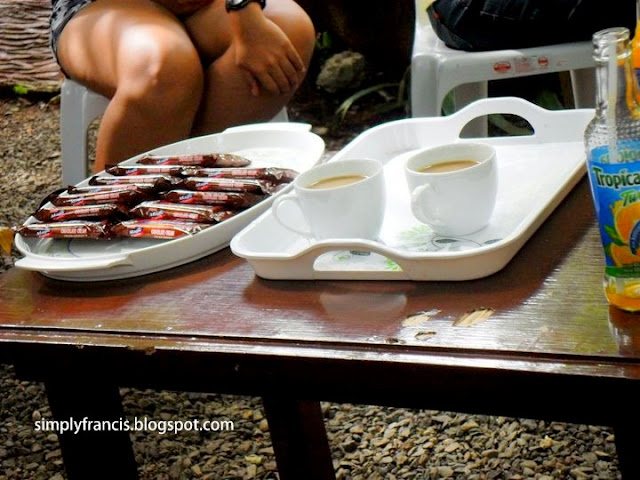 They were generous to have offered us bottled juices, and coffee cups with biscuits to go with it. Welcoming and generous they are. 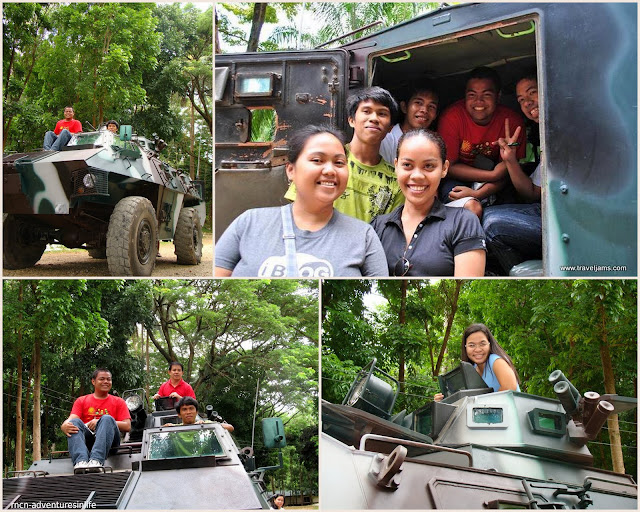 Our first treat was a tank. All too ourselves for pictorial and inspection purposes. And by inspection, I mean, was to just look around — no pushing of buttons, pulling of cords, or going around near control switches. We were all over the “lean, mean, fighting machine”. …or something like that. 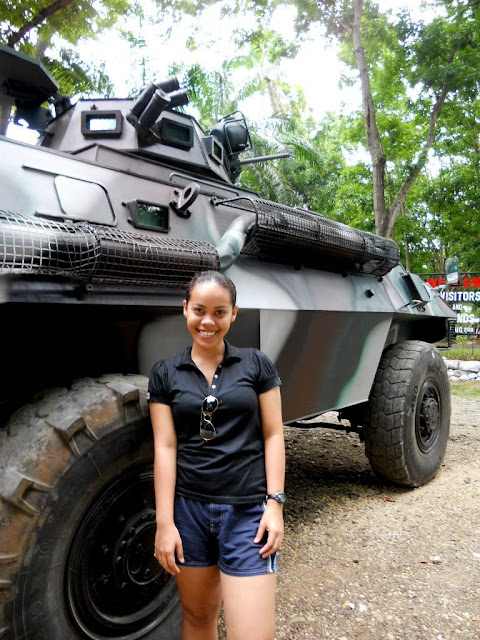 I, on the other hand, just stood at this metal beast for a picture. The closest I got to it, at this stage, was to just take a peek inside. LOL. which was cutesy in a puppy-cute way. LOL! Both my grandpa’s were men in uniforms. The army, the air force, and the grandchild that did not, until then, comprehend that they were men just like the ones in this camp.
I was awed. I was mum for awhile.
And I just stood there because I might, imagine, their voice saying in a grandpa-voice-to-a-toddler, “Lailai no..”. LOL! I could only just imagine lives of people close to my heart. And being at that grace was a blessing. 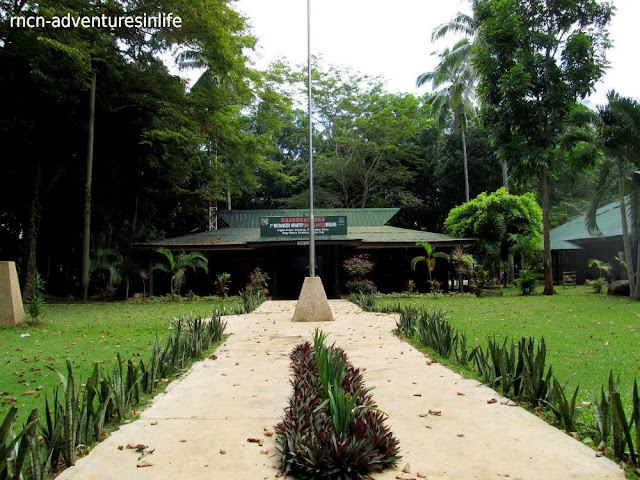 I like the small but well-kept buildings they had. I asked, if by any chance, they have a hospital inside. But I was saddened to know that a nurse would only drop by twice a month to check their vitals and health. I, personally, believe that a health personnel should look into them everyday. Then again, I guess, it’s in their training to do medical emergency response, that could be useful in  the absence of a medical practitioner. 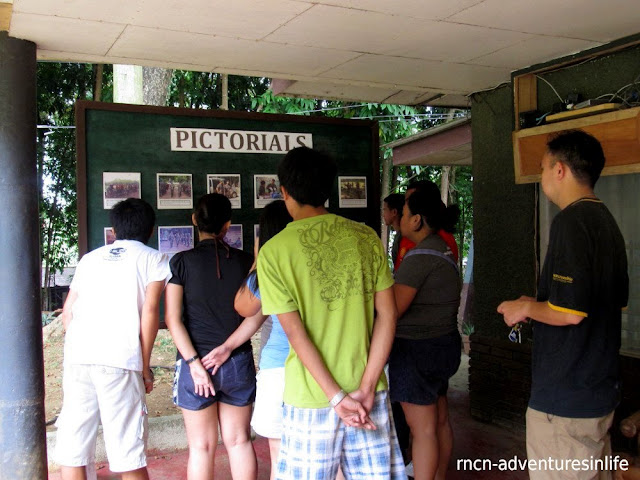 We were looking at the pictures and I saw that they also do medical missions like other brigades I’ve seen working with. I like the image of men in camouflage uniform performing medical missions. LOL! Children would mum up from fear of injections and fear from the guys in those uniforms. You get things done easier then. 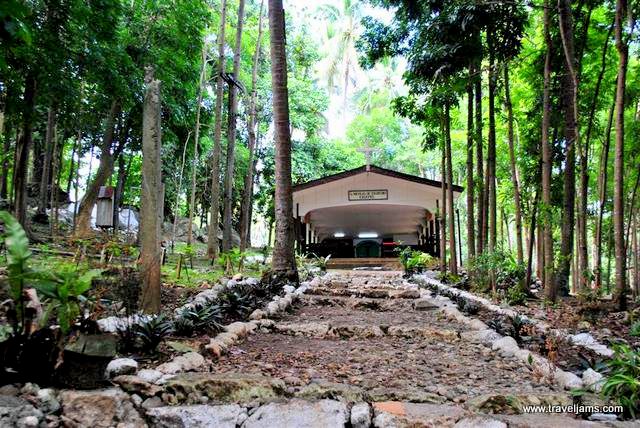 On one nook is an open chapel for them to hear mass. They said that they encourage all types of religions to give time in prayer to meditate and reflect. 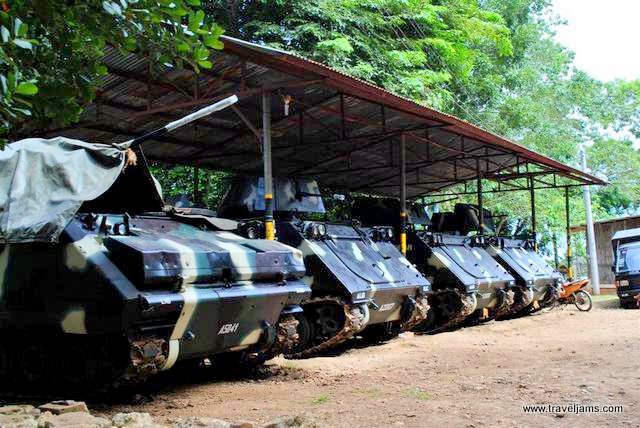 We also got to see  armory they had and the other facilities in the area. The tour would be great for educational purposes. Children would love to see these. 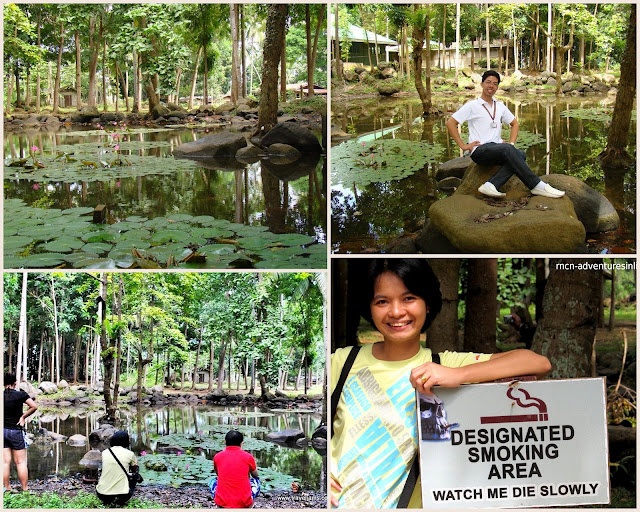 Along the tour, we saw a small pond made by nature. It was not developed but it looked well than I thought it should be. A nice picnic area would be nice in that setting, as the officers talked about possibilities in developing the pond. Beside it was a slab of square concrete with a sign that says “Designated Smoking Areas”. The tag line below, “watch me die slowly” has both humor and a strong positive impact to campaigning for good health. 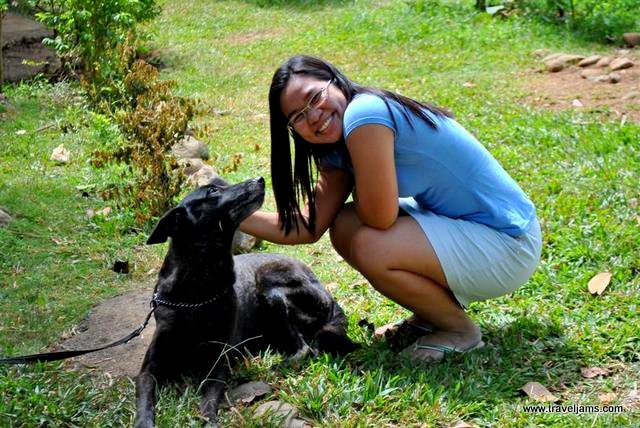 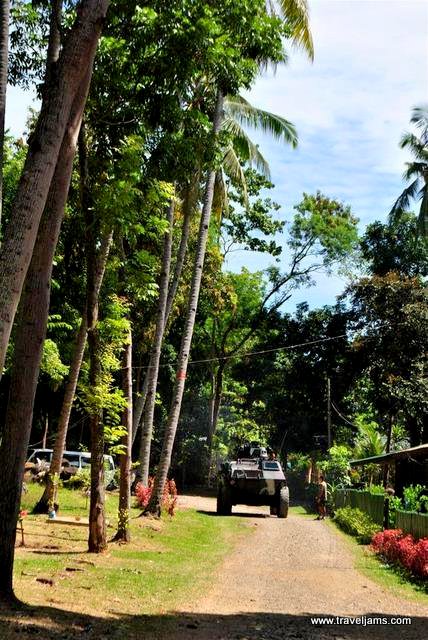 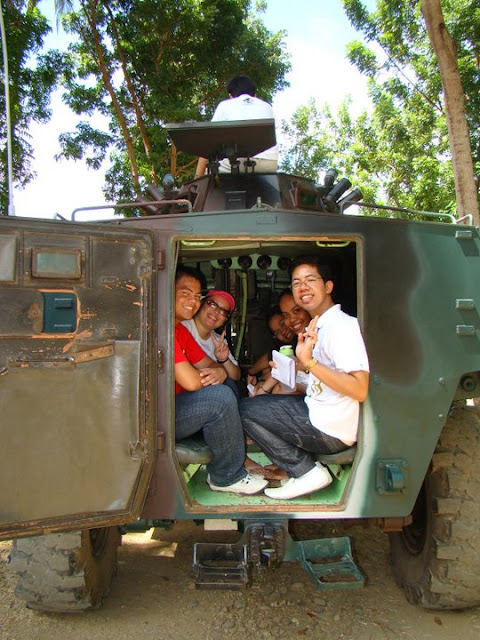 We were escorted and accompanied inside while we went around the camp. I got to ride inside. We asked to keep the doors open because were not used to closed compartments. And after that ride, we bid farewells and thanked the accommodating soldiers who were nice enough to welcome us and show us around.

TRAVEL NOTES
+ Before visiting the camp, send in your letter of request and intent, that way they will expect you visiting them. We had one trhough the kindness of the Iligan City Tourism Office.
City Tourism Office:
Bahay Salakot, Buhanginan Hills, Pala-o, Iligan City 9200, Philippines
Tel No: +63 (063) 221-3426
Email: iligancitytourism@yahoo.com
+ Show your letter of intent to the guards before entering the camp. Tell them that you are expected.
+ Do courtesy call to the highest ranking officer before taking the tour.
+ Ask to be toured around and don’t be shy asking questions about anything within topic.

Directions/ How to get there: