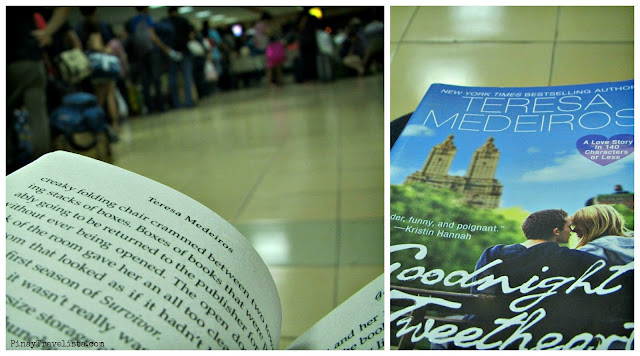 
Who would have thought that in the month that precedes the love month February, I would find that familiar feeling tugging up my sleeves where my heart used to be displayed. I thought I was quirkyalone at the moment. You know, being single and being okay with it than be in a relationship for the sake of just. being. in. one.  A mindset that I thought a not-really-normal-and-sane-person has but not at all knew — uncompromising romantics. Goodnight Tweetheart was “Hello there love” printed words on pages, a light read was both entertaining, and interesting.

First Lines:
“In her darker moments Abby Donovan had often fantasized that her career of choice might lead her to become intimately acquainted with the phrase, “Would you like fries to go with that?” But she’d never guessed she’d end up embracing that traditional uniform of working women the world over — the bunny costume.“
About The Book:

Bestselling author Abigail Donovan almost won the Pulitzer Prize and did win Oprah’s stamp of approval. So why is she spending her days–and nights–hiding in her expensive New York City condo with only her two cats for company? When her publicist drags her into the world of social media, Abby figures she’ll meet some 14-year-old living in his mom’s basement. But instead she finds Mark Baynard, a sexy and quick-witted English professor traveling the world in search of adventure. Although she tries to resist his charms, Mark begins to shatter Abby’s writer’s block one wickedly funny encounter at a time.
But just when she begins to write–and live–again, Abby discovers Mark is hiding a secret that could change both of their lives forever.

2 Cent Thoughts:
A fascinating  and emotional read that I had to draw the curtains, and face the wall when reading it. I giggled, sheepishly smiled by myself, fought back tears, and let out subdued sighs. I never allowed myself to get so engrossed with a book in public like that. But who the hell cares! Definitely not the gentleman from below the lower bunk snoring himself to dreamland. Maybe because I could relate, that I did allowed myself to relate to the story. Ack! I fell for the total chic lit! It was because it was written so playfully that you can’t put it down, and before you know it, you find a grinning you.

Travel With or Travel Without:
This is a pocket-size. You probably get it done in 3-5 hours straight. It would be a nice company during long transit time, or in between connecting flights or what. This is a romantic chic lit book in contemporary set-up. Most of you might have been saving these book genre during your “Me-Time” routine. This one though would be a nice fitting read should you be doing short travel by yourself. I apologized a few times having to wave off my travel buddies for this. A delightful read — whether on the road, or at home.