It was a probably a joke that turn bad, but taken with good heart between the Strong Waves, Sea Urchin Sting Remedy and I. I would be entirely lying if I would say I did not, one bit, had a good laugh at this experience. I would not wish it on anyone, or maybe my misfortune was not as bad as how others have had it. But relying on your friends, and locals on what to do, and sea urchin sting remedy is the best way to go about the very unfortunate situation.

The Evil Strong Waves told us that January is not the best month to go visiting Apo Island when you’re not planning to dive, but just snorkel, beach bum, and waste time with your friends. Just. Because. You. Can. Blaming the geographical location of the island, the waves is always rough around mid-day to the late, and the strong winds brought by January was not a pretty good combination. But heck, who cares Strong Waves?!!!
Well, I didn’t, until I met this guy.
The Sea Urchin  come in menacing dark color, and I say that with fear between my teeth because I will never look at them as harmless creatures I can swim away from — ever again! Okay. So that is not exactly the one whose sorry spines was then embedded on my foot. But I’m pretty sure they have this occult powers to communicate with each other of the plight of one accident – prone travelista with one of their own. They were hidden in crevices of corals, and you could not step on them, and be stung — unless you’re just as unlucky as me.
Meet a bad angle of the side of feet, and some tiny spines on them. 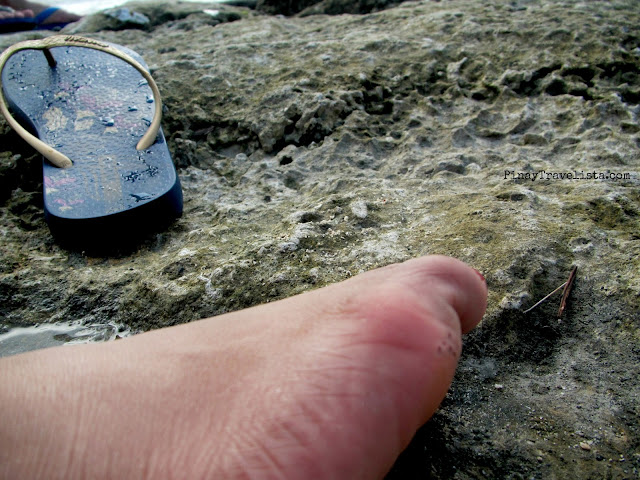 I was paddling towards the shores minding those sea slugs, and sea urchins hidden in the crevices of the corals. I see one here, a couple of ones there. I was aware of them in, and out of the water. The evil strong waves, have other things in mind, and probably thought it was funny and pushed me to shore, and only to drag me back out. Several. Times. Until my foot was dragged onto the corals, and slipped into one of those crevices where the innocent sea urchin was quietly hiding.

Symptoms to expect: stinging sensation on the affected area, possibly discomfort on mobility or joint and muscle pain, and bluish discoloration. These symptoms depends on the severity of the sting. 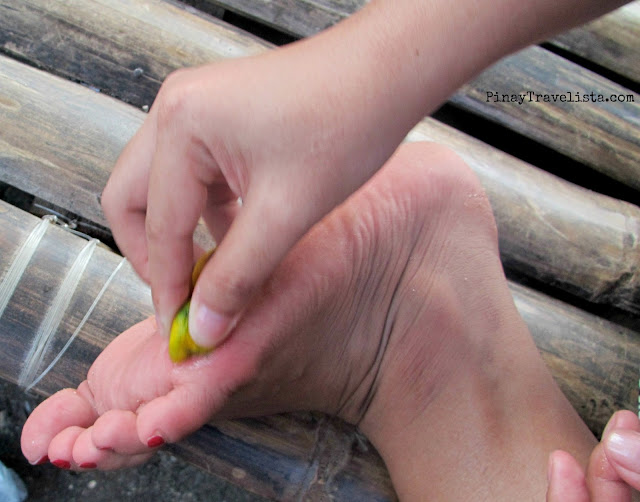 Carl swore on his ancestors grave that urine would do the trick. Coming from a community by the sea, and being a close friend, I gave in to his experiment. He sprinted the fast he could to find a container for the urine. I was actually more concern where he got the bottle, than the urine itself! I quickly checked for open wounds, and there was none, so I gave him the go signal. The locals were pretty amused at how I, actually, got the side of my foot stung, and gave me calamansi to rub on the area which distracted me from the pain. I need not do anything much after those local treatment since I only had a few not-so-deeply-embedded spines on my foot. Peter was then looking for vinegar to use on his neck, and back from jellyfish stings, and the rest idled with jokes, and some good laughs before we washed up for dinner.

Sea Urchins actually seek refuge in coral crevices during daylight, and usually goes out of it during nightfall. The purple sea urchin have additional defense mechanism, pedicellarines, that are tiny jaw-like structures that clasps on skin to inject a painful poison. If you see these kind, run swim away from them. Sea Urchin spines are calcium-based, Vitamin D supplementation will help the body absorb it quickly. The very science behind why you won’t grow spines if your stung by them.

Locals would treat the affected area with urine, or calamansi, and do pa-aso (to subject the area to smoke coming from a small fire).

I wish you no sea urchin or jelly fish stings on your swims! But if ever that happens, your friend’s bladder or the sari-sari store have exactly what you need!