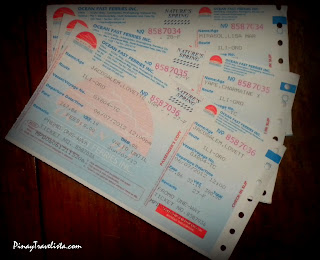 We were very excited to take on the Hudyaka 2012 invitation. 1.] It was a festival of the whole ZaNorte province — all the cities and municipalities in one festive dance of merriment, 2.] another excuse to be on the road, and 3.] we really wanted to try out the new Iligan City – Oroquieta City ocean fast ferry.
Oroquieta City is where my mom hailed from, and when I told her I’d be off to Dipolog and will be trying out the new route, she was excited for me. After all, it means lesser travel time for us during visits to her hometown. And my grandparents death anniversary is around the corner, she may want to take this route herself.

Unfortunately, the 12 noon scheduled 1H and 30 mins. trip from Iligan City to Oroquieta was cancelled.

Reschedule it or have it cancelled totally and get a refund. — we did not have the luxury of time!
Here are the reasons why I travel early:
..and if you decide to join me in my trips, you would not wonder my my biological clock is set every 4-5AM for my everyday wake up call.
Delayed, and cancelled flights and trips.
Force majeure is a chance occurrence in which neither party has any control — an event described in legal terms as Act of God, and with that, it is hard to point at anyone for the blame. And sometimes, there’s nothing else that you could do when the voice from overhead speaker announces a late arrival of your plane. So I always put a considerable grace period and leave the itinerary lose for the transit day.
Less Traffic.
There are less vehicles on the road and pretty much a smooth ride — a moving vehicle heightens up my excitement! <– redundant! IKR?! But that’s exactly my point. Because it means I’m getting somewhere.  And beating the commuters is my top priority. I’ve been pushed through a bus window to save seats during my preteen days during hectic travel times when my mom would take us back to her hometown a lot of times. I think I have had enough of that. And I do not think it is a pretty sight for a 20-something year old female to climb into a bus through it’s window. Hmmmm.. (Actually considering) I think, I could still make that work. LOL!
Daylight Time.
My rule of the thumb when I travel by myself — is get there by the earliest possible time I could, with daylight. Navigating around to find a  decent place to stay in the evening is pretty difficult. You might end up taking an accommodation just because it was the first, and closest thing you could find. And because I want to go around a place before calling it a day, maybe catch the sunset  there that would be good for my whole trip.